Getting it right- adventures in decorating. 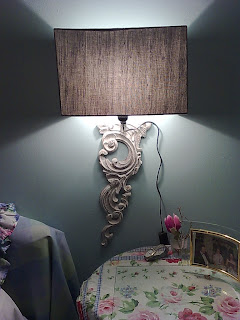 My lovely neighbour who kindly gave me the garden-chairs which I did up in this post has a passion for interior decorating and loves to change things around.
She has amazed me every time with the transformations she has achieved- she is definitely a interior decorator
manquee ! And I ususally say :" But it was so pretty the last time!" Hahahaha.
It's great fun to play around with elements of a room as there is so much you can do differently.

I would like to take you through what a different bit of lighting can do to a room.

I had found some lovely patterened curtains with a pale blue background , so I decided I wanted the bedroom to have blue walls. I am in the middle of changing my mind at the moment as I may stencil the whole room with a " Berkely Sprig " pattern but that is by the by.
It might be too busy and more suitable for fabric.But blue walls it is at the moment.
So here are the curtains- my starting point. 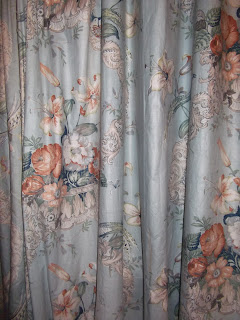 The style I wanted to go for was  classic English country house look with a bit of vitage and bohemian thrown in. Perfetto!
First I had two different bedside lamps while I kept a look out for something I liked.
It really annoyed the heck out of me that there was no symmetry.It's like an itch you can't scratch.
See what I mean. 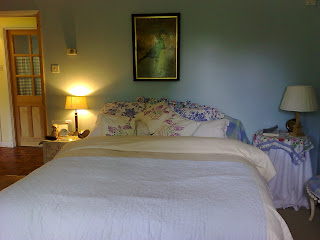 There is a lovely interior shop, called Urban Rustics where I always go when I feel the need for happiness and calm.
It's my Tiffany's as in " Breakfast at Tiffany's".
If life gets her down, Holly Golightly in Truman Capote's book, has her breakfast in front of the Tiffany's jewellery store window and sanity is restored.
" Urban Rustics" works the same way for me.But I don't need a croissant.
It's all trendy, rustic, cutting edge, old and new together.I could easily live in that shop and be perfectly happy. Shame they have no beds!

They had some great wall lights that were way out of my budget.

I must have circled those lamps for months.They never sold. Obviously I wasn't the only one who did not have that sort of budget. I tried to forget them.
A year passed.

Then I saw one of the sconces and shades propped up on the floor in the shop.I zoomed straight in and asked for a discount and got it for the two lights.That was a good day.

Shame I had no idea where to put them.

So the pale grey shades and the pale lime-washed wood went on the blue wall in the bedroom. 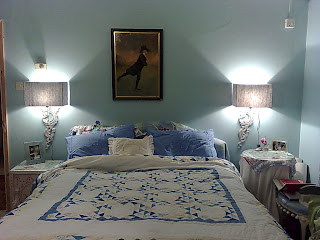 I was happy with my Urban Rustic finds.But the blue wall being so overpowering with the grey of the lamps started to annoy me and I thought the wall light better- perfect in fact- for the entrance hall.
I neded a good rectangulat mirror to echo the shape of the shaeds, but I only had an oval antique one. 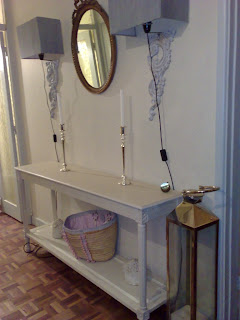 One step at a time! Eventually I found one but it took me ages to hang it up.. 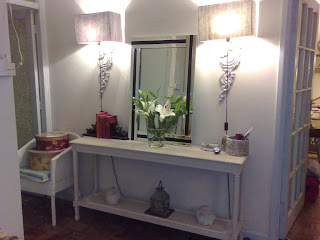 Here is a close-up. 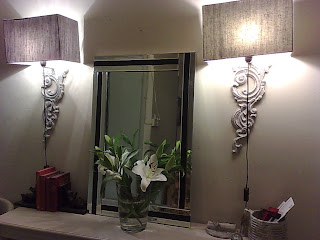 So the lamps moved to the hall and I had nothing in the bedroom.
I dragged two classic column based lamps from the living room and the hall to have some light and to make-do. 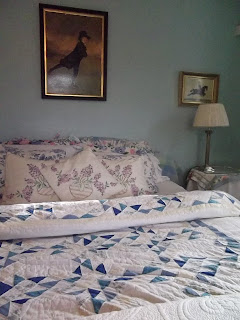 The pillows on the bed were made like this in this post by the way.
So all I wanted for Christmas- apart from a dog- which I did get- ( two , in fact-Millie and Maud ),
was a couple of bedside lamps so I could finally have the old lights back in the living room and have some new lights in the bedroom .
So we found this in Laura Asghley in the sale.Not the cat obviously ! 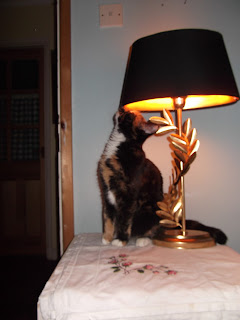 The black shade works more or less with the blue wall. 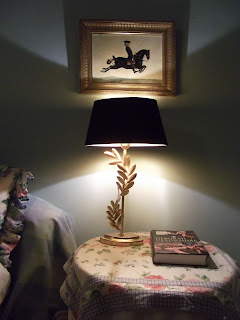 But the light is not very strong and it makes the whole room rather dark- like a sort of smart library. 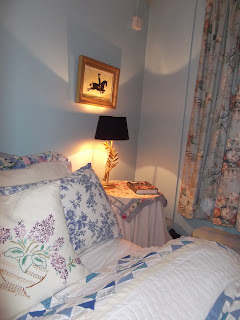 Whereas the look I was aiming for was classic English country house look with a bit of vintage and bohemian.
So I am not convinced.What do you think ? Do you change things around as often as this ? Or do you just give up? Or would you say to me like I always say to my neighbour :" But it was so pretty the last time!".
I look forward to you comments !!!

Posted by Modern Country Lady at 21:43

Depending on wanting to read in bed or not, the gray silk sconces were better suited for that purpose. Those black ones are really dark.
You just have to play with it and figure out what you want out of them. Just for looks is different than having them for a purpose.

Enjoy this fine-tuning (it never ends by the way!),

I like those scones, they look so old world yet so modern!