Darling Divine Dresser- before and after 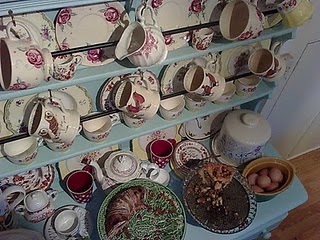 Don't you just love a Welsh Dresser, bursting with favourite pieces of china and crockery, all mismatched  in a glorious mayhem of colours ?
Well, I didn't -I told myself.
No, no, not enough room in the kitchen-and  also ,of course, it wasn't  very hygienic or practical.
No, much better not !! I could do without a Welsh dresser !!
I did suffer the occasional Dresser Envy , looking through the latest "Country Living" , but you can't have everything .
Life Without A Welsh Dresser was perfectly fine.
Meanwhile , my kitchen cupboard-shelves started to bulge and sag worryingly under the amount of china I was collecting,  until to get something in the cupboard, you had to take three things out.
Until one day I drove home past a shop that had a great sign with "CLOSING DOWN"in the window.
In the road stood a really ugly little Welsh Dresser, so forlorn and dark brown, like a small, lost, wet dog, that
I felt genuinely sorry for it.
The dresser- before ( think even darker brown - like black treacle). 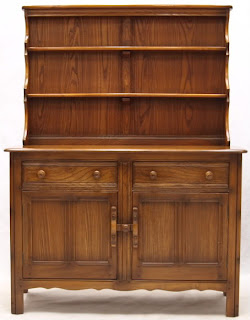 Goodness, it was ugly.The only good thing about it, was that it was quite petite, so it would actually fit in my kitchen -and in my car .
"Are you selling this ?" I said to the man next to it .
"Twenty-five pounds -and I will help you put it in the car "he said.
It was a perfect fit .
I put it in the garage as I thought it too ugly to look at and needed time to think, about colours.
Eventually I decided on " Blue Ground" from Farrow and Ball - a colour that I had used before on a Lutyens bench in the garden.
I decided for blue mainly because the crockery I wanted to display ( Johnson Bros "Pareek" ) had yellow in it and I thought the contrast would work well.
And here is the "after" picture. 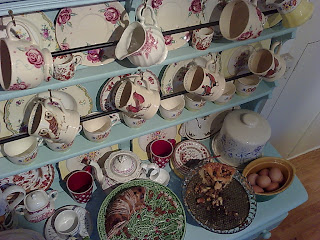 Have you succumbed to Welsh Dresser-itis? Or are you living Life Without A Welsh Dresser ??
And what colour would you have gone for ??
Let me know what you think!!!
I am linking this to 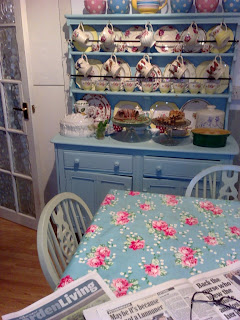 Posted by Modern Country Lady at 20:42

From what I can see of it- I like it. :-) I mostly see all your "crockery" which I really like but I'd love to see more of your dresser too. I imagine it's lovely!

It is beautiful, great job! Thanks so much for visiting me today. ;)

This is adorable. I'm glad you succumbed!

Oh my! That looks so darling! You did an awesome job and I feel like I am looking at a picture of a beautiful tea shop. I also love your story-telling abilities! You are one gifted lady! :-)
Thanks so much for joining the party again this week!
Vanessa

What a beautiful piece! Love the polka dots!

you hit a jackpot! beautiful dresser for that price! love it! and love the dishes even more!

I also have a hutch that I got recently. I am afraid to paint it, and besides, that would take a lot of time I don't currently have. So I really cleaned it up and left it brown.

I have been having fun changing out the plates I display on it, so for now I am glad it is brown. If I had painted it white, the plates would not show up as well. Let me know what you think, I now have 3 posts with different arrangements.

What a great redo! I saw you on Make it yours day stop by http://mostlyfoodandcrafts.blogspot.com/

I really like your blog.
You do a great job!
I painted a piece, and in the begining I was afraid to do it. But I like the result. I have the post in my blog : ionedartes.blogspot.com.
I subscrived your blog, so I will be your follower.
Ione

You did a beautiful job and the color is perfect!

So beautiful and bright!!! Love that shade of blue! And the china just pops against it!!! Thanks so much for linking to Fancy This Fridays!!! Hope to see you again this week!!!

Chari at Happy To Design said...

Ooooh...I love, love, LOVE your welsh dresser!!! I think you got quite a great deal on it and I love the pretty shade of blue that you chose for it! The blue really does look beautiful with all that gorgeous china! Ohhh yes...I seriously have welsh dresser envy right now! Hehe! Thank you for sharing your beautifully refinished dresser/hutch with us for the Sunday Favorites repost party this week!

I have never heard of a Welsh dresser but I like it and especially the colour you painted yours.

Love the baby blue color and I like all your teacup sets....Christine

Oh, I'm so deprived! I don't have one of these gorgeous cabinets! I love yours and what a pretty blue too. Love those lovely dishes you've put in your cabinet.
Thank you so much for coming to my party and it's nice to meet you! Hope you'll come back for a visit sometimes.
Shelia ;)

Oh, your cupboard is beautiful. I love the blue. Thanks for sharing. Karie

I did not have dresser envy...until now! Oh my~ your dresser is just gorgeous. I love all the little cups hanging in a fun row. And the color, like the sky on a sunny day!
NOw I have to look into a Welsh dresser!
Yvonne

That is adorable...would love to have one and of course knowing me it would be black! lol Have a great week...Picket

Oooooo! What a great make over ! And such a sweet and lovely blue, too! the blue sets off your dishes so well! I have an old farm house built in hutch but I love stand alone ones even more! ♥

Such a pretty cabinet! Great job.

I love your Welsh Dresser. I have one in blue in my kitchen too. I was just reading your profile ~ you sky dive? Wow, you have more nerve than I do!!

The dresser is just beautiful...I love the color you have painted it. A great transformation. I know it is feeling loved with all of your pretty dishes inside!! Beautiful!

The dresser is very cute! That's a great shade of blue. You chose wisely. I've been thinking of painting a cabinet in our bedroom, and I'm going over colors in my mind. It might end up being yellow or pink. My husband doesn't know that yet. LOL.

Your dishes look very cute in it. The perfect companions. Thanks for sharing your cupboard with us. I think you got a great price on that piece, too.

I store some of my dishes in an antique bookcase that my husband would murder me if I went near it with a paint brush, but I've been dreaming of a new piece that I can paint and jazz up to my heart's content. ;-)

This is just the sweetest most divine color. Now you're making me wish I painted my china cabinet blue! (I painted mine green.) It looks absolutely lovely!

Blue is pretty.....I've always thought I'd paint mine white then I see black ones blue ones green ones...what to do. Love it in your header. Trish

What an inspiration! I am looking at the set of brown shelves in my laundry room in a whole new way!

its lovey ,im doing my dresser at the moment not sure to pait it duck egg blue{same as my kitchen cupboards } or cream ,so looking forward to having my pretty china on display that ive been colecting for years ,
Bee Happy
Suzie Bee